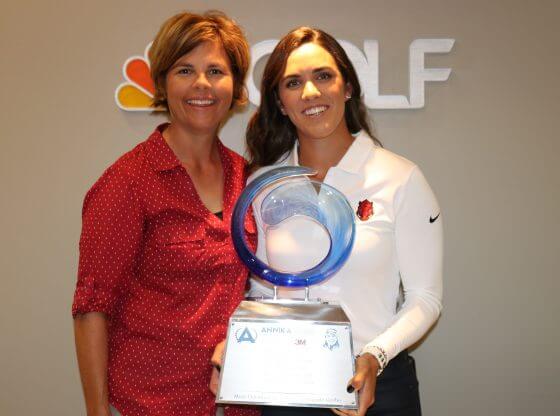 2018 WGCA First-Team All-American Won Six Tournaments in 2017-18, Including theANNIKA Intercollegiate Presented by 3M(ORLANDO, Fla.) – The ANNIKA Foundation – golf Hall-of-Famer Annika Sorenstam’s charitable organization – congratulates Arkansas junior Maria Fassi for winning the 2018 ANNIKA Award presented by 3M.A native of Pachuca, Mexico, Fassi was recognized for her outstanding 2017-18 season in a vote by fellow players, coaches and golf media. She kicked off her brilliant campaign by successfully defending her individual title at the 2017 ANNIKA Intercollegiate presented by 3M in Minnesota. This was followed by five more victories, recognition as a First-Team WGCA All-American and SEC Women’s Player of the Year honors.Fassi accepted the ANNIKA Award on Wednesday evening at Golf Channel studios during Golf Central. She will be more formally honored at the 2018 … Read More